What is the fire triangle? Fire Science

Fires start when a flammable or a combustible material, in combination with a sufficient quantity of an oxidizer such as oxygen gas or another oxygen rich compound, is exposed to a source of heat or ambient temperature above the flash point. Because it can sustain a rate of rapid oxidization, it produces a chain reaction. So, heat, fuel and oxygen are needed to start a fire, without one of these elements the fire cannot achieve its goal of destruction.

This process has been described commonly as the ‘Fire Triangle.’ 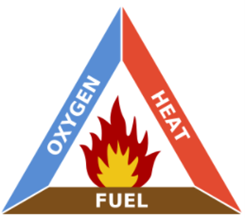 The fire triangle (or combustion triangle) is a simple model for understanding the necessary ingredients for most fires.

The triangle illustrates the three elements a fire needs to ignite: heat, fuel and oxygen.

Heat must be present for ignition to take place. All flammable materials give off flammable vapors which, when heat is present, combust. Heat is also responsible for the spread and maintenance of fire as it removes the moisture from nearby fuel, warming the surrounding area and pre-heating fuel in its path, enabling it to travel and develop with greater ease.

Fuel is any kind of combustible material including paper, oils, wood, gases, fabrics, liquids, plastics, and rubber. The fuel for a fire is usually characterised by its moisture content, size, shape, and quantity and this will determine how easily it will burn and at what temperature.

Ambient air is made up of approximately 21% oxygen and, as most fires only require at least 16% oxygen to burn, it acts as the oxidizing agent in the chemical reaction. This means that when the fuel burns, it reacts with the oxygen to release heat and generate combustion.

A fire naturally occurs when the elements are present and combined in the right mixture. A fire can be prevented or extinguished by removing any one of the elements in the fire triangle. For example, covering a fire with a fire blanket blocks oxygen and works to extinguish it. In large fires where firefighters are called in, decreasing the amount of oxygen is not usually an option because there is no effective way to make that happen in an extended area.

Further fire research determined that a fourth element, a chemical chain reaction, was a necessary component of fire. So, more commonly now the fire triangle is being referred to as the ‘Fire Tetrahedron’. 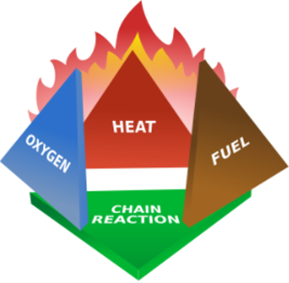 The fire tetrahedron represents an additional component in the chemical chain reaction, to the three already present in the fire triangle. Once a fire has started, the resulting exothermic chain reaction sustains the fire and allows it to continue until at least one of the elements of the fire is blocked. Foam can be used to deny the fire the oxygen it needs; water can be used to lower the temperature of the fuel below the ignition point or to remove or disperse the fuel. Certain gases can even be used to remove free radicals and create a barrier of inert gas in a direct attack on the chemical reaction responsible for the fire.

This question was answered by Alec Purdie

Alec joined the technical team at Quelfire in February 2020, embarking on a new and exciting career in the world of passive fire protection

Learn More About Alec Purdie
Still Got a Question?

What is the fire triangle?

Fires start when a flammable or a combustible material, in combination with a sufficient quantity of