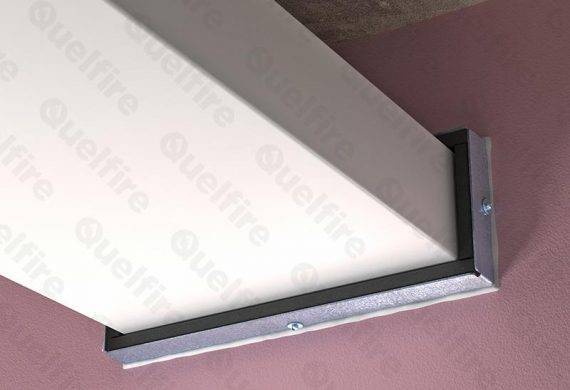 According to the building regulations ‘Approved Document B’, service penetrations through fire compartment walls need to be equipped a with firestopping solution to prevent the spread of fire. In case of plastic vent ducts, this is typically covered by installing either intumescent fire collars or intumescent fire sleeves.

So which solution is best to use around ventilation ducts?

Fire collars require mechanical fixings to be secured to the structure, while fire sleeves can simply be slid into place around the pipe, which makes them simple to install, and also a more ‘foolproof’ solution since there is less room for error during the installation. Using fire sleeves requires more planning in advance; the correct size opening needs to be cut that can accommodate the fire sleeve around the vent duct. If firestopping is considered at the earliest possible stage of the construction project – which Quelfire has been a keen advocate for –, this should not pose a problem.

Because a fire can break out within any fire compartment of the building and service penetrations need to be firestopped from both sides, in case of using fire collars, a unit needs to be installed both sides of the wall. Fire sleeves sit within the wall around the vent duct and contain intumescent at both ends, so only a single unit is required for each vent duct penetration, which makes them a more cost-effective solution.

Quelfire strongly recommends using fire sleeves which reflects in the scope of applications it is suitable for. Fire sleeves have gone through extensive testing in different walls including plasterboard, as well as in fire batts.

To summarise why is it better to use intumescent fire sleeves:

When can intumescent fire collars be used in conjunction with vent ducts then?

If the firestopping is considered retrospectively and a solution needs to be found for the already installed vent ducts, it is considerably easier to use fire collars as they be retro-fitted. It is important to confirm, however, that relevant application is covered by testing.

Another use of fire collars is for vertical ventilation ductwork (plastic vent duct penetrating fire rated floor/ceiling), where a single unit should be installed to the underside of the floor. Again, please check that the application is covered by testing.