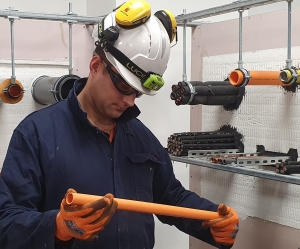 QuelStop HPE Sealant has been approved to be used with both BlazeMaster and Spears CPVC sprinkler pipes. It has also been tested in a wide range of applications from single skin plasterboard walls to over-sized holes and formed letterboxes.

CPVC pipes have been rapidly utilised in fire sprinkler systems for many years now. However, recently there has been an increase in the failure rate of these type of pipes. Investigations carried out have shown that the most overwhelming common failure of CPVC pipes was due to contamination with incompatible products.

The combination of the CPVC pipe being under stress and exposed to a chemical that is incompatible with it, leads to Environmental Stress Cracking (ESC).

Amorphous polymers, like CPVC, derive their strength from the fact that they are long chain-like molecules that are tangled together. When enough of these chains break or become untangled, they develop a breach in the solid polymer and cause a failure of the plastic. This breakage can happen due to strong chemical effects such as plasticisation, strong mechanical stresses such as impact damage or a combination of both.

Certain chemicals can be very effective at the disentanglement to separate the polymer molecules from each other. Chemicals like Tetrahydrofuran (used in solvent cement) and Dioctyl Phthalate (used in some types of sealant) fall into this category.

So, when firestopping CPVC pipes, care must be taken not to allow the pipe to meet any material that may result in a failure. Incorrect sealant may contain phthalates and phosphate esters which can migrate from the sealant and into the CPVC pipe, which can then cause it to weaken, split or crack. Therefore, it is important that the products that are used in conjunction with these CPVC sprinkler piping systems do not contain any of these components and are chemically compatible.

The QuelStop Intumescent Graphite HPE Sealant has been fire tested with all the commonly used plastic pipes and complies with the requirements of BS EN 1366-3:2009.

To qualify for inclusion in the program called FBC™ System Compatible Program, products must go through additional testing and their manufacturing facilities audited by a third-party lab. Products accepted onto the program are displayed on the Lubrizol’s system compatible product finder and given the right to display the FBC™ System Compatible mark on their labels. The link below will take you to this page:

They also have an incompatible product list as well to avoid damage to their pipes and fittings, which lists products that been deemed a hazard. Please use the link below to see this information:

Spears is one of the leading manufacturers of thermoplastic valves, fittings, and piping system components.

The QuelStop HPE Intumescent Graphite Sealant has now been tested and evaluated by Spears® for acceptable use with Spears® CPVC Products and have shown no adverse CPVC compatibility issues when installed and utilised as intended.

The compatibility applies to FlameGuard® CPVC fire sprinkler products, LabWaste® CPVC corrosive waste drainage system and EverTuff® CPVC CTS plumbing system. The QuelStop HPE Intumescent Graphite Sealant can be found under the category “UK/Australia Only Compatible Products” on their website, for more information please use the link below:

Our CPVC Sprinkler pipe details can be located using this link.

If you have any further questions, please email us at technical@quelfire.co.uk

This question was answered by Alec Purdie

Learn More About Alec Purdie
Still Got a Question?

What is a Fire Batt?

What is a ‘tested solution’ for service penetrations?

The simple answer is something that has been tested in accordance with, and proven to meet the requi

What is mineral wool and how is it made?

Mineral wool, otherwise known as rock wool or stone wool, has been widely used for more than 60 year