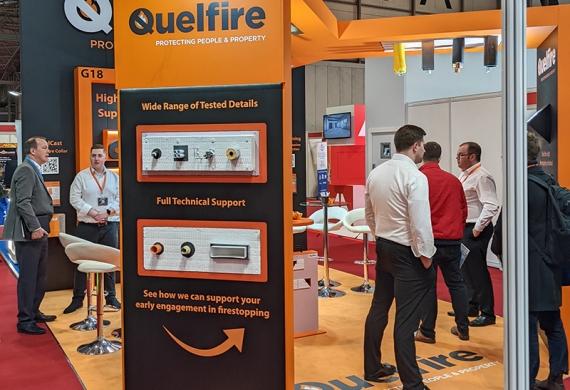 Quelfire have had a successful three days at The Fire Safety Event (FSE) at the NEC, Birmingham between 5-7 April! It has been great to catch up with existing customers whilst opening avenues for new, potential prospects. Like our fellow exhibitors, we are so glad to have been able to showcase our products and solutions, hoping to instil just how important fire safety in the industry is.

As part of the FSE’s mission to support the industry in achieving and maintaining fire safety standards, we promoted early engagement in firestopping, launched The QuelSelector, our new firestopping solution finder tool, and displayed some of our latest tested details.

Early Engagement in Firestopping: It is our strong belief that firestopping should be considered at the earliest stages of construction and firestopping contractors, as well as firestopping system manufacturers, should be involved. Ultimately, this will help save lives and protect buildings. In addition, this will ensure compliant and achievable installations, prevent extra cost and delays, and improve your reputation.

Tested Details: We take great pride in offering a wide range of tested details, developed based on real-life scenarios and feedback from our customers. As seen at the exhibition, elements from the QuelStop Firestopping System were used in various applications, evidenced by extensive testing.

The QuelSelector: It was our pleasure to officially introduce this guide-like tool, which enables customers to find suitable solutions for their application. Engaging with feedback which found that a system was needed to break down our extensive library of tested details, we were eager to introduce this to improve the user experience.

On the third day of the exhibition our Sales Director, Craig Wells, took to the stage to conduct a CPD presentation on Effective Passive Fire Protection. With a lunchtime slot and only several empty seats, we hope that those who were able to attend found it useful.

Craig said: “Despite a later slot at the end of a busy three days, the presentation was very well attended. Based on the feedback it received, the raw theme was that it successfully raised awareness and was very informative.

Overall, I think that, as a team, we managed to get our message out. Through networking, our energy and emphasis on early engagement was respected. It was great to engage with like-minded professionals seeking to improve fire safety in buildings. I know that we have a long way to go in terms of cultural change, but this is proof that we are moving in the right direction.”

Quelfire have enjoyed using another great platform to convey messages that we find important within the fire industry. With a push for reform, it has been great to have important face-to-face conversations. We would like to thank everyone who came to see us at our stand and look forward to continuing these conversations at FIREX, with the aim of Protecting People & Property.