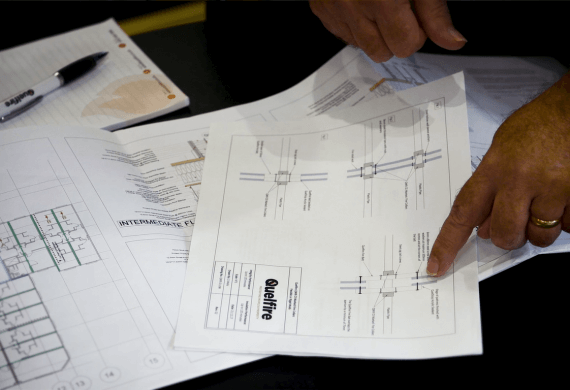 Firestopping service penetrations – the importance and benefits of early engagement

This article is based on the virtual panel discussion held under the umbrella of London Build Online on 25 November 2020.

The panel members were:

The article has been published in the February issue of the UK Fire Magazine.

The industry has already seen a major shift regarding the early consideration of firestopping service penetrations in the last few years, and especially since the tragic Grenfell Tower fire – this is something all participants have agreed during the discussion. However, they all pointed out ways in which current practices and mentality within the construction industry can and need to be improved further.

How early is early enough?

In the preparation of ‘the purple book’, there has been a lot of debate going into determining how early is early enough, and how early is too early – Alex Double revealed. The document recommends that, ideally, the specialist firestopping contractors, as well as the manufacturers, are engaged during Stage 1 of RIBA plan of work. Even if the fully extended details of the M&E services are not known at that stage, it is advisable to at least keep track of the details, and as soon as they are known, take the firestopping contractor and the manufacturer on board. ‘We wanted to change the way we thought about service penetrations; we wanted them to be discussed and everyone engaged in this process at the earliest possible stage,’ he pointed out when discussing the aim of the document.

Keith Patrick explained that from a main-contractor point of view, traditionally, procurement has been carried out in order of procurement value of each package. This meant that the firestopping, due to its relatively small value compared to other packages, such as the M&E, has been considered as far as 9–10 months after the start of the project. ‘That is just far too late,’ he warned and shared that they always ensure that they procure the M&E and the firestopping package at around the same time of the programme.

‘From an architect-practice perspective, consideration of firestopping can start even earlier, during pre-planning, when decisions are made about the location of compartmentation walls and main routes of M&E services,’ Philip Trueman added. It needs to be ensured that, when it comes to firestopping, principles allow it to happen in line with the manufacturers’ guidance.

Over the last three years, Chris Morgan has seen a significant shift not only in the scope of the work that the specialist firestopping contractors undertake but also in the time of their engagement. ‘Our presence on the site has shifted from the end of the job to essentially when pipes are being fitted,’ he said. ‘Five to six years ago, the firestopping package was often carved up to various other subcontractors, such as the drylining and M&E contractors, and firestoppers were called in at the end of the job to complete “awkward stuff that nobody else could do” as an “emergency service”,’ Chris described from previous experiences. ‘Today, we are often talking through projects that have not even started on site.’

Who needs to be engaged?

As Alex reminded, firestopping service penetrations is not just about the actual firestop products, it is about the services themselves and the substrate construction. This makes it important to engage with all the trades and other manufacturers of systems, for example the drywall manufacturer to establish their requirements for creating the penetrations remembering the firestop is intended to maintain the integrity of the compartment construction.

Keith also highlighted the necessity of engaging the M&E contractor, in addition to the firestopping contractor, because of the overlap between those disciplines; some firestopping work may still have to be done via the M&E package for practical reasons. ‘You must get both of those people in the same room talking before anything gets built, along with the architects and designers to go through everything,’ he said. He mentioned the insulation that is going on the pipes as a typical example: it needs to be determined whether there is a tested firestopping solution compatible with it before building can begin.

Craig Wells also mentioned other system manufacturers that, he believes, need to be included in the ‘circle of communication’ about firestopping: ventilation companies, the manufacturers of gas pipes or sprinkler pipes. Ideally, there should be tested solutions for firestopping when they bring new systems to the market.

How can manufacturers help and what can they do to facilitate the process?

Craig also reported of early experiences similar to those of Chris: firestopping being considered too late in the process, and manufacturers coming under pressure at the last minute to come up with a solution, which is essentially not possible because of the timescales.

He sees the role of the firestopping manufacturer in the improvement of this process as an educator: anybody who is involved in the design and management of installation of firestopping solutions needs to be made aware of the requirements but also the solutions available and how they should be installed. 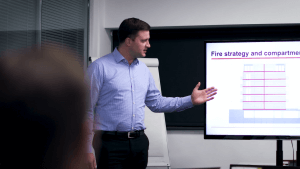 Educating the construction industry about firestopping is key

Craig added that ‘the most important thing we can do is just make information readily available for those that need it’. This could include scope of application, assessments, test reports, installation guides, standard details that can be drawn on by anyone at any point.

He believes manufacturers also need to keep an open mind for feedback on how they can contribute to moving the industry forward.

Alex also advised that it is vital for other stakeholders to communicate with the manufacturer, they need to be made aware about emerging trends in construction, so that they can react faster with potential solutions. ‘There is certainly an appetite to test those scenarios, but they can only test them if they know,’ he said. Craig has confirmed that it is in the manufacturers’ interest to test common occurrences, but testing and certification is a time-consuming process, hence they need to be made aware as soon as possible. As an example of recent trends, Alex brought up the rising trend of the installation of stacked plastic ventilation ducts in residential schemes. He also warned against assuming that if a solution has been tested in a singular application, it can just be multiplied, and the same rule applied.

‘I think we all have to be better in our industry at communication, something that I think historically the construction industry is not great at. It is getting much better, but we can still do more,’ Alex concluded.

Who should liability sit with?

As Philip confirmed, responsibility for the selection and type of firestopping systems should be taken by the architect. Supported by information provided by the manufacturer, they have to ensure that design details are in line with the various manufacturers’ test data and certificates, and that what is being issued to site for construction is compliant. They also work closely with the firestopping subcontractor, to make sure they understand the details.

Keith welcomed the attitude and explained that when it comes to P12 (Firestopping systems) of NBS Specifications, main contractors still often see the phrase ‘contractor’s choice’ on the documentation received from architects. Rather than focusing too much on liability or who is responsible for what, he encourages the approach of working together: ‘Get everybody in the room, early doors and talk it out to get it right the first time.’ He reminded about the detrimental moral, legal, as well as financial consequences of any non-compliant or incorrect installations. He described the Draft Building Safety Bill2 as a ‘sobering document for anybody involved in the construction industry’ and pointed out that under Section 94, creating or contributing to conditions, where an occupant in a building could be injured, will become a criminal offence, punishable by up to two years in prison.

Chris also promoted collaboration and believes the other key stakeholders such as the M&E contractors and the dryliners need to be encouraged to fully understand why they are being asked to carry out installations in certain ways – for example, dryliners to form openings correctly or the M&E contractors to apply correct spacings between services. ‘Everyone needs to be engaged and understand what the whole end goal is.’

Andrew and Alex took the opportunity to refer to the Firestopping of Service Penetrations Guide and remind everyone that it promotes collaboration. It includes 34 questions to go through to design a penetration seal, and it is very unlikely that one person will have the answer to all of those questions. That is why it is vital to bring everybody around the table with their own areas of expertise.

Keith believes that pricing could be one of the indicators. Prices significantly lower than the rest should be a warning sign that not all aspects of firestopping have been considered. Simply engaging with them in communication could also reveal their level of competence.

According to Alex, other things to look for in a firestopping installer are third-party certification, as well as trade-body memberships, which show commitment to the industry and having their work audited by a third party. He also recommended asking whether they are doing any ongoing training on site. Changing regulations, intricacies of installation of different manufacturers’ systems make ongoing training a necessity.

Keith also emphasised that ongoing training needs to be provided to anyone involved in PFP installation during the project, involving the manufacturer with their presence on site if needed. In his experience, operatives on site tend to be very appreciative of any training opportunity.

Alex listed the following training types that can contribute to more compliant installations: manufacturer training, NVQ training, in-house training, IFP & ASFP courses. Chris completed the list with site-specific inductions, monthly updates on changes to the industry and visual training where possible, so that operatives can see what a particular brand’s product looks like.

If you would like to learn more about firestopping, you can sign up to Quelfire’s CPD Training.

You can also watch the full panel discussion on-demand: Firestopping – The Importance and Benefits of Early Engagement